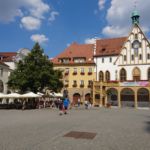 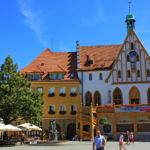 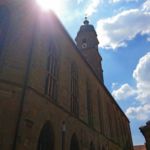 The massive sandstone building of the Basilica of St. Martin on Amberg’s market square. 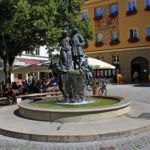 The Wedding Fountain commemorates the historic wedding in 1474, which was arranged by Elector Frederick I of the Palatinate. 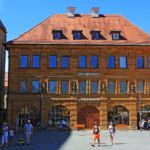 The Ratstrinkstube was built in the 18th century. The only thing that has remained is the name of the current commercial building. 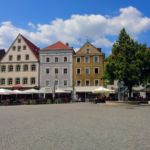 The Amberg market place offers gastronomy in many variations as well as shopping possibilities of Amberg and Nuremberg specialities. 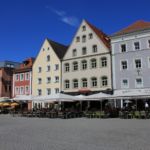 The culinary mile on Amberg’s market square offers restaurants, bars and cafés. You can also buy Amberg and Nuremberg specialities.

Start of a city walk

Amberg’s market square is an excellent starting point for a stroll through Amberg’s historic city centre. Already here the interested tourist admires impressive architectural contemporary witnesses. These include the Ratstrinkstube, the imposing St. Martin Basilica and the Amberg Town Hall. A potpourri of shops, culinary venues and bars round off the overall experience.

The wedding fountain at the market place in Amberg

Directly in front of the Amberg town hall the Amberg wedding fountain splashes from spring to autumn. In 2000 Engelbert Süß designed this fountain as a reminiscence of a very special event. The marriage of Margaret of Bavaria-Landshut and Philip of the Palatinate went down in history as the “Amberg Wedding 1474”. The bronze water feature shows the noble bride and groom, both flanked by two jesters. To commemorate this event, which is now more than 900 years old, the Amberg Fountain Festival takes place every two years.

An Amberg town hall was first mentioned in writing as early as 1348. However, it was not until after a devastating fire in 1356 that construction of the present building began. The western façade facing the Amberg market square was built at this time. In the course of history, the town lords constantly extended the town hall, most recently in the last third of the 19th century. Particularly worth seeing are the “Gothic Room”, the former council chapel, as well as the “Great Hall” and the “Archive Vault”.

The building, which is now known as the “Ratstrinkstube”, was first erected in the 18th century as a three-storey structure. Already in the middle of the 15th century there seems to have been a similar building on the “Geintzen” estate, which was located on this site. This can be evidenced by written financial transactions. This house housed, in addition to the Ratstrinkstube, a grocery store and the “Obere Apotheke” (upper pharmacy). The sandstone figures on the façade, which embody the four elements, are striking. The building, in the meantime also called “Wittelsbacher Hof”, was finally transformed into a commercial building in 1920 after it was sold to the merchant Paul Baumgart.

The St. Martin Basilica on the market square in Amberg

The Basilica of St. Martin is the largest hall church in northern Bavaria, as it impresses with its impressive dimensions: 72 metres long, 28 metres wide and a ridge height of around 40 metres. The present Gothic church was preceded by a Romanesque chapel, which was demolished in the middle of the 15th century.

Lovingly restored facades of houses frame the Amberg market square. The shops, restaurants and bars invite you to linger. Especially on warm summer nights, this place is an unforgettable meeting place to linger and chat.

The market place in Amberg is also the heart of many events in Amberg. The Old Town Festival, the Witches’ Night and the Air Night have their highlights here. It is also a wonderful starting point for exciting excursions through Amberg’s history. From here you can easily get to hidden highlights like the Eh’Häusl, the Frauenkirche and much more. 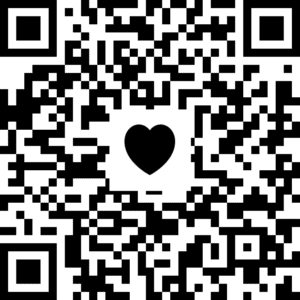 Epilepsy Safe Mode
Dampens color and removes blinks
This mode enables people with epilepsy to use the website safely by eliminating the risk of seizures that result from flashing or blinking animations and risky color combinations.
Visually Impaired Mode
Improves website's visuals
This mode adjusts the website for the convenience of users with visual impairments such as Degrading Eyesight, Tunnel Vision, Cataract, Glaucoma, and others.
Cognitive Disability Mode
Helps to focus on specific content
This mode provides different assistive options to help users with cognitive impairments such as Dyslexia, Autism, CVA, and others, to focus on the essential elements of the website more easily.
ADHD Friendly Mode
Reduces distractions and improve focus
This mode helps users with ADHD and Neurodevelopmental disorders to read, browse, and focus on the main website elements more easily while significantly reducing distractions.
Blindness Mode
Allows using the site with your screen-reader
This mode configures the website to be compatible with screen-readers such as JAWS, NVDA, VoiceOver, and TalkBack. A screen-reader is software for blind users that is installed on a computer and smartphone, and websites must be compatible with it.

We firmly believe that the internet should be available and accessible to anyone, and are committed to providing a website that is accessible to the widest possible audience, regardless of circumstance and ability. To fulfill this, we aim to adhere as strictly as possible to the World Wide Web Consortium’s (W3C) Web Content Accessibility Guidelines 2.1 (WCAG 2.1) at the AA level. These guidelines explain how to make web content accessible to people with a wide array of disabilities. Complying with those guidelines helps us ensure that the website is accessible to all people: blind people, people with motor impairments, visual impairment, cognitive disabilities, and more. This website utilizes various technologies that are meant to make it as accessible as possible at all times. We utilize an accessibility interface that allows persons with specific disabilities to adjust the website’s UI (user interface) and design it to their personal needs. Additionally, the website utilizes an AI-based application that runs in the background and optimizes its accessibility level constantly. This application remediates the website’s HTML, adapts Its functionality and behavior for screen-readers used by the blind users, and for keyboard functions used by individuals with motor impairments. If you’ve found a malfunction or have ideas for improvement, we’ll be happy to hear from you. You can reach out to the website’s operators by using the following email

Our website implements the ARIA attributes (Accessible Rich Internet Applications) technique, alongside various different behavioral changes, to ensure blind users visiting with screen-readers are able to read, comprehend, and enjoy the website’s functions. As soon as a user with a screen-reader enters your site, they immediately receive a prompt to enter the Screen-Reader Profile so they can browse and operate your site effectively. Here’s how our website covers some of the most important screen-reader requirements, alongside console screenshots of code examples:

We aim to support the widest array of browsers and assistive technologies as possible, so our users can choose the best fitting tools for them, with as few limitations as possible. Therefore, we have worked very hard to be able to support all major systems that comprise over 95% of the user market share including Google Chrome, Mozilla Firefox, Apple Safari, Opera and Microsoft Edge, JAWS and NVDA (screen readers), both for Windows and for MAC users.

Despite our very best efforts to allow anybody to adjust the website to their needs, there may still be pages or sections that are not fully accessible, are in the process of becoming accessible, or are lacking an adequate technological solution to make them accessible. Still, we are continually improving our accessibility, adding, updating and improving its options and features, and developing and adopting new technologies. All this is meant to reach the optimal level of accessibility, following technological advancements. For any assistance, please reach out to